“The praise about Busquets must be stopped, it was never evident last night, he looked out of sorts.”

So its already old news that England defeated Spain 3-2 in the UEFA Nations League match up.  The Three Lions are now on 4 points in group 4, relegation according to the new system was a very real possibility. However, after this victory, Gareth Southgate and his men give themselves a much-needed shot in the arm.  England reached the semi-finals for the first time since 1990 and the euphoria was tangible after many years of vast under performance.  The press, of course, has leapt on this latest victory and rightfully so, Spain was well and truly beaten in the first half.  One has many statements to choose from with England’s latest victory but the one that stood out was the one made by Sam Allardyce.  “Big Sam” as he is known by many made some very bold statements indicating that Barcelona and Spain midfielder Sergio Busquets is not better than Eric Dier.

He made many statements but the one that stood out was when he said: “The praise about Busquets must be stopped, it was never evident last night, he looked out of sorts.”   Football is a wonderful thing and everyone has different interpretations of how the game should be played and their evaluation of players but this raises a huge question. Is England’s own worst enemy themselves?

It seems that sometimes the English media and sports personalities in the desire to recapture the glory and assert themselves on the world stage tend to perhaps make some very questionable statements. Now don’t get me wrong I perfectly understand what its like to revel in victory, I hail from Trinidad & Tobago. The mere possibility of qualification strictly from a fan perspective makes my pores raise, England, however, is an entirely different matter altogether.  Marketed as the best league in the world it sometimes makes those who are on the outside looking in if England’s failings are a result of an inability to be grounded in their analysis and are guilty of falling for their own hype?

Who will win the Ballon d’or 2018? Will the ten year dominance of Leo Messi and Cristiano Ronaldo finally end?

At the World Cup in Russia, anyone who dared criticized England was deemed as negative and were quickly attacked for anything other than praise. This is an entire discussion altogether but it does correlate to the topic at hand.  When someone like Allardyce makes statements like this it does not help their case. He is not just some fan who can be forgiven for some emotional outburst as a result of the victory, this is a former England coach.  Roy Keane back in 2010 did not hold back when Fabio Capello’s England limped out the tournament and openly criticized the English media for carelessly calling the players World Class and even went on in an interview on BBC to break down each players performance that season.

“Busquets is a sitting midfield player who breaks up play, intercepts, passes it very quickly and is intelligent. That’s what he is. He’s not much more than that, but he gets a lot of praise for it.” – Sam Allardyce

The irony of all this is that Gareth Southgate was heavily criticized when he was appointed and not given much of a chance by his more esteemed colleagues and experts but it seems he is exactly what England needs and seems to be way more level-headed than his peers. Is he perfect? of course not, but you cannot argue that his evaluation of England’s pool of players and the systems used to reflect that of a man who thinks logically and not emotionally. This is in no way taking away from the work of Gareth Southgate or the latest positive results but to put this question out there, are Sam Allardyce statements about Busquets a reflection of a footballing culture that tends to get a bit carried away with their own hype?

Check how to spot Bandwagon Fans by Andre Sooklal HERE 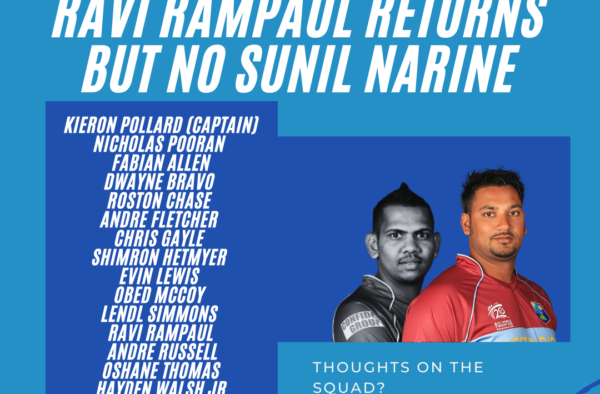 Ravi Rampaul the man who was a part of the 2012 World Cup-winning team returns for the first time…
Uncategorized April 15, 2018

Author: Andre Sooklal, PERFORM Sports Media Correspondent Are you a fan of FIFA? Chances are you may have played Leo…