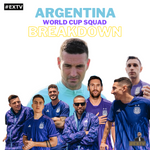 So, Lionel Scaloni has announced his final 26-man list for the 2022 World Cup Campaign in Qatar. For the first time in many years, there are arguably no glaring and bizarre omissions this time around.

One player outside Lionel Messi who, barring injury, is guaranteed to start is Emiliano Martinez. This guy has had quite a journey career-wise and was not even supposed to be the starting goalkeeper at the Copa America 2021. However, due to Armani getting Covid-19 he stepped in and completely owned the position in that tournament. His dominating performances and particularly his strong display of personality in the shootout against Colombia officially cemented him as number one for this team. Ever since the bizarre exclusion of Sergio Romero back in 2018, no player has really dominated the position. It seemed for a time that Franco Armani was favoured by Lionel Scaloni. Even though his form with River Plate came under question, he admittedly always did pretty well for Argentina. Another factor that works for him is that he played at the last World Cup and he may be an experienced player who can be an asset during the tournament, also theoretically will not be overawed if he needs to come in. Geronimo Rulli who has been growing a lot at Villareal is also the more capable backup and continues the tradition of carrying at least one young goalkeeper to the World Cup. Many suspected Juan Musso would have been included, but Scaloni settled on those three and while other players had claims for a spot, it’s not difficult to see why he went with these three.

The defense for Argentina looks the strongest it has ever been for a while. Players like Cristian Romero of Tottenham and Lisando Martinez of Manchester United are quite formidable additions that have made the Albiceleste backline stronger. Nicholas Otamendi, who before the Copa America 2021 triumph was seen by many as the weak link in the back line, seems to be a different player since returning to Benfica. Another reason is that the Argentina coaching staff includes legends Roberto Ayala and Walter Samuel, who definitely may have used their experience to get the best out of Otamendi. German Pezzella of Real Betis, formerly of Fiorentina, is a player with mixed form but has always performed well in Scaloni’s set-up. A perfect example of this was at the Copa America finals against Brazil when he had to come on for Cristian Romero and did so admirably. An interesting choice is the inclusion of Juan Foyth into the team. The Villareal man has been a regular for Scaloni’s team but was excluded from the Copa America final squad and many believed it was because of his momentary lapse which cost Argentina 3 points in a World Cup qualifying game against Colombia. His inclusion may have something to do with Lo Celso getting injured, and also his tactical flexibility. Foyth can play as a centre-back, full-back and in midfield if required and it is perhaps for this reason, he was able to secure a spot in the team.

A key concern for Argentina is the full-back position. Marcos Acuna seems to be battling an injury and reportedly the claims are that he will not function at his full capacity. The left-back position is one that he often rotates with Nicholas Tagliafico. Scaloni has in the past used both players when required and Acuna has been a crucial component of this Argentina team. While Tagliafico is more than capable, I am sure Scaloni would prefer both players to be fit. On the right side, you have Nahuel Molina (Atletico Madrid) and Gonzalo Montiel (Sevilla), who clearly has earned the trust of the coaching staff. While both players have performed well for the team consistently, some are arguing how they will cope against top-level European teams’ pace when the time comes. Also, as mentioned before, Juan Foyth can easily slip into that position if required. Furthermore, if Scaloni opts for 3 at the back these players are more than capable of adjusting accordingly, making this particular Argentina quite dynamic.

A huge component of Argentina’s recent success is the midfield. Scaloni has relied heavily on the three-man midfield of Rodrigo De Paul, Leandro Paredes and Giovani Lo Celso. So, when it was announced that Lo Celso would not be making the squad, many Argentina fans became distressed. Lo Celso in particular has shown that his ability to supply the ball to Messi while maintaining the balance between offense and defense has been absolutely key to why the team has been able to play the way they do. The chemistry built with this trio is undeniable. So, with the inclusion of Enzo Fernandez (Benfica), Alexis Mac Allister (Brighton) may be as a result of Lo Celso being left out because of his injury. Both players have very different characteristics and can not be truly considered direct replacements. Along with Alejandro Gomez and Exequiel Palacios, it remains to be seen how Scaloni will set up the midfield. Guido Rodriguez is primarily a defensive midfielder. Will Scaloni do what Sabella did back in 2014 when he could not rely on Gago, and replace dynamism with stability at the cost of creativity? This is a question on everyone’s minds, but I am sure that Scaloni and his team would have had contingencies for this scenario, even though it is far from ideal.

An area where Argentina always seems to have an abundance of talent is the offense. Scaloni favours the 4-3-3 but has shown that he is not afraid to mix things up and have dynamic solutions for different situations. In the Copa America final, he played what was a base formation of 4-4-2 with Lautaro Martinez and Lionel Messi as the front two. Angel Di Maria played wide left of the midfield but always going to be the third attacking player from the right, which easily made the formation switch back and forth when required. With Argentina’s abundance of attacking prowess, there will always be an exclusion that will cause an upset and, in this case, it is Angel Correa. Scaloni opted to go with the young Julien Alvarez (Manchester City) and Joaquin Correa (Inter Milan). Many theorize that Joaquin Correa may be included due to the options he gives in terms of height, however many can counter the argument that he rarely scores goals from his head, just ask Inter Milan fans. What Joaquin does bring is attacking range. He can act as an out-and-out striker, wide attacking player or even an attacking “Enganche” type player if required.

Nico Gonzalez and Angel Di Maria will definitely be used in attacking wide positions as they have been in the past and with the addition of Paulo Dybala to the mix, the result is a lot of attacking solutions for Scaloni. Dybala has been in and out of the squad and while the Roma man seemed to have finally found that comfort zone to play alongside Messi, he has always been injury prone. His spot was in jeopardy after battling with an injury that kept him out of Roma’s games. It remains to be seen if the injury has affected his form heading into the tournament. Many calls were made for the inclusion of Giovanni Simeone in the team along with Angel Correa due to their form and goal conversion rate versus Joaquin Correa, which are in fact valid but as stated before Scaloni opted to go with the latter, and time will tell if it was the right choice.

So, Lionel Scaloni has managed to do what many other more esteemed coaches have not been able to do, and that is to get Argentina back to its winning ways with 2 trophies within a year. Scaloni favours the 4-3-3 formation but is known for trying out different solutions if required, which include the 4-4-2 and even playing 3 at the back. In the past, most teams who are perceived as weaker teams tend to play very defensively against Argentina and resort heavily to the counterattack and exploiting gaps left by wing-backs or the center-backs when they are higher up the pitch. This Argentina team, while more than capable of taking the initiative offensively, is also very comfortable based on recent form defending and sitting back if required. The form has shown that while Argentina’s defense is very strong, it is not completely watertight and teams that play physical and counter-attacking football can cause Argentina problems. The one issue is that in order to exploit this weakness the team has to sustain this for the entire 90-minute period or run the risk of being cut apart themselves, but the quality Argentina possesses. Scaloni appears to have found that balance that Argentina missed for some time now with sometimes intricate triangle passes that can go from very quick passing to slow controlled possession in an instant. Several times it can be seen where it is almost as if Argentina invites teams to press and then capitalizes on the spaces made as a result. A perfect example of this was in the Copa America final against Brazil when the only goal of the game was scored.

Argentina seemed to have finally shaken that awful shadow of not winning an international title in many years, and even though they are always under pressure to win everything they enter, this time around Argentina comes into the tournament with a bit more peace of mind than in the previous World Cup in 2018. Many are putting them as outright favourites, however, anyone who has watched any World Cup will know that is far from easy and there are many variables that are sometimes intangible to go all the way. With that being said, they are without a doubt, title contenders, and after finally winning their first senior titles since 1993, it would be very foolish to count them out. Getting to the final is far from a foregone conclusion, however, Argentina without a doubt certainly has the ingredients to reach the final and win it. Lionel Messi has already announced that this is his last World Cup and as stated before, while it is far from a done deal, this team definitely has the ingredients to go far in this tournament.

Check how to spot Bandwagon Fans by Andre Sooklal HERE 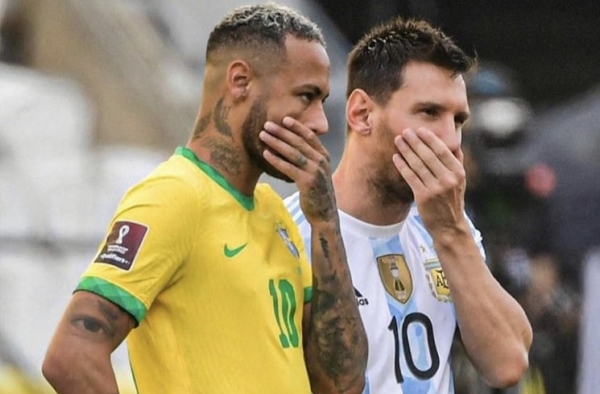 A World Cup qualification game between Brazil and Argentina was halted after only a few minutes on Sunday after Brazilian health…
Football Clubs Sports & Games Uncategorized August 26, 2021